Breaking up the Boys' Club

Helen Brimmell: She was a graduate of the University of Toronto, where she was deputy editor of the Varsity student paper (“the editor was always a man,” she noted dryly). The CP wire service in those days recruited the top Varsity people and, after six
months, CP editors sent her to Ottawa to cover women’s affairs and softer
news, like Government House — the governor general’s comings and goings.
She did not have a press gallery card. But after filling in for a male staffer
covering a committee, she asked for a membership. She got it in April 1946
on condition that she not attend the annual gallery dinner stag. “I told them,
‘It’s all right with me.’ I didn’t want to spoil their fun.” She was only the third
woman accredited as a member in seventy-nine years. (Power, Prime Ministers and the Press, Dundurn, 2018. Also available in audiobook format).

Joyce Fairbairn: When the twenty-two-year-old Albertan reported for work on Parliament Hill for United Press International in 1962, she was the only woman in the gallery. In a recording made byTom Earle for Parliament’s oral history project, she said that for the first few weeks, Norman McLeod, her boss in the one-room office, wouldn’t even speak to her because he “was initially reluctant to have a woman in
that bureau.” Her first big scoop that year was a bulletin reporting that the
Diefenbaker government would fall… To Fairbairn’s dismay, McLeod decided that she should stay off the election campaign trail leading up to the June 18 vote. He felt, as she put it, “something awful might happen” behind the flimsy canvas curtains
on the sleeping cars of the trains to “this slip of a girl.” Her hopes were
“dashed,” said Fairbairn… Prime Minister Diefenbaker and Liberal leader Pearson got wind of the issue, and “to their eternal credit, said the decision was absolutely wrong” and that she “had the same right as anyone else to cover their campaign.”
At the time, the annual press gallery dinner, a black-tie affair attended
by the who’s who of official Ottawa, was still off-limits to Joyce and any
females. She could buy tickets for male guests, but she couldn’t go herself. 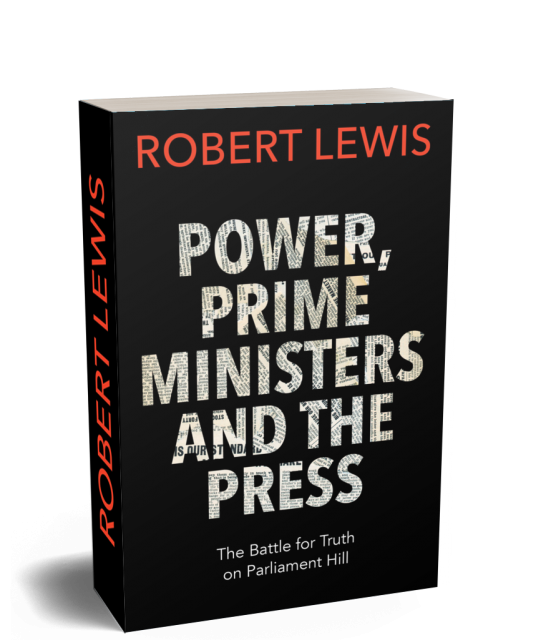 One: At the Beginning

On Wednesday, November 6, 1867, official Ottawa was abuzz with excitement. A 19-gun salute from the Ottawa Field Battery greeted Viscount Charles Stanley Monck, the 48-year-old Governor General, as he arrived to preside over the first session of the new nation’s Parliament. After the formalities of swearing in MPs and the cabinet ended, Sir John A. Macdonald, the 53-year-old prime minister picked by Monck for the role, moved the appointment of the first House speaker. Seconding the motion was Macdonald’s seatmate, Sir George Etienne Cartier. Then, Joseph Dufrense, the Quebec Conservative MP from Montcalm, rose in his seat and, addressing the House in French, protested the election of Hon. James Cockburn of Northumberland West. In the words of the Toronto Globe the next day, Dufrense complained, “the gentleman could not speak the French language. He thought it was to be regretted that, at the inauguration of the new system, greater respect was not shown to Lower Canada in this matter. He looked upon this as a matter of national feeling.” Without further discussion, the House then went about its business in English. Along with the report, The Globe, a partisan Liberal outlet in its day, used an adjacent column in the November 7 paper to condemn Macdonald for using the Speakership as a reward for a loyal but unpromising follower.

So much for a smooth start for the first Parliament.

The Globe report was significant: it affirmed the vital role of the Press Gallery in national affairs, since there were no official records of debates – known as Hansard – until 1875. Indeed, the Parliamentary Press Gallery is as old as Confederation. While the great fire of 1916 that razed the Parliament buildings destroyed most of the official records, the first volume of the House of Commons Journals mentions the “reporters’ room.” In fact, pre-Confederation reporters covering the Parliament of Upper Canada actually worked out of the still-under-construction Parliament Buildings in 1866 – an anniversary the Press Gallery marked with the publication of a retrospective, Sharp Wits & Busy Pens, in June 2016.

The tradition of covering legislatures dates back to the colonial days. John Bushell published the first issue of his Halifax Gazette in 1752. Quebec’s pioneering paper, The Quebec Gazette, appeared in 1764. Journalists had reported on political debates in Quebec City since 1792 and established la Tribune de la presse Québécoise on November 18, 1871 . Étienne Parent, the young intellectual who was the guiding spirit of the nationaliste paper Le Canadien, later served as a senior cabinet official for the Province of Canada, moving as the seat of government shifted among Kingston, Montreal, Toronto and Quebec between 1843 and 1859 – and submitting occasional articles to his paper. Other pre-Confederation journalists led the fight for press freedoms and reform. William Lyon Mackenzie, destined to mount the Upper Canada Rebellion against the Family Compact, wrote in his Colonial Advocate: “Wherever the press is not free, the people are poor, abject, degraded slaves.” Halifax editor Joseph Howe of The Novascotian, George Brown of The Globe and Parent were among the influential journalists who later played strong, controversial political roles in shaping Canada. Of the 98-member Province of Canada delegation attending the Charlottetown Conference in 1864, 23 were journalists. As educator George Grant observed in 1828, “At this time in the history of the world, it was almost impossible to be an editor without being a politician also.”

And how the members of the Press Gallery could play politics. Thomas White Jr., called “the Father of the Gallery” by the Canadian Illustrated News in 1875, bought The Hamilton Spectator and The Gazette in Montreal before getting elected and becoming Macdonald’s influential minister of the interior. Another Macdonald backer was erudite Alfred D. DeCelles of the influential La Minerve who ultimately became the Parliamentary Librarian. Henry Bourassa left Laurier’s cabinet and founded Le Devoir in Montreal and turned over direction of the paper to a Gallery veteran, Georges Pelletier. In the 1900s, two English giants of journalism – friendly with the party in power – graduated from the Press Gallery to become editors of powerful newspapers: John Willison of The Globe in Toronto and John Dafoe of the Free Press in Winnipeg. In almost a direct line, Dafoe’s figurative descendants over the decades continued the close association and influence with Liberal governments, including Grant Dexter of the Free Press, Bruce Hutchison of The Sun in Vancouver and Blair Fraser of Maclean’s. For the Conservatives, there was the irrepressible Grattan O’Leary, who rose from poverty in the Gaspé to the editorship of The Ottawa Journal and was a confidant of three Tory leaders. In an era when there was no Twitter, SnapChat or email these were men who wrote diaries and exchanged letters with leaders and each other, providing a trove of archival material for historians about their thinking and their actions.

From all of that, we know that early Press Gallery members were a highly partisan lot. Indeed, the seating plan mirrored the one on the floor of the Commons below. London Free Press editor Arthur Ford, who covered his first Parliament in 1907 for the former Winnipeg Telegram, recalled in his memoirs: “When I first went to the capital, the Liberals were in power and sat, of course, to the right of the Speaker. The representative of the Liberal press sat in the Press Gallery also to the right.” When the Conservatives won the 1911 election, the Tory reporters swapped with the Liberals and moved over to the speaker’s right. So-called “independent” journalists were relegated to the cheap seats.

Until Laurier’s time, governments ladled out information – even including election calls – as patronage only to their friends in the Gallery, the “ministerial press” as they were known. Willison, who started in Ottawa in 1886 as a correspondent for the Liberal-leaning Globe, complained about his Tory-leaning rivals having access to official documents before they were tabled in Parliament. “Their dispatches would be in the telegraph office before less favoured rivals could examine the reports.” Ford acknowledged: “It was one way a grateful ministry paid newspapers for their support.”

And what support. Ford recalls that one of his freelance gigs was filing to the Fredericton Gleaner, then owned by a rabid Conservative, James Crockett. Prime Minister Borden had just finished outlining his proposals for the controversial naval assistance bill to provide England with cash. Wilfrid Laurier’s response was highly anticipated, given the opposition in his party ranks and the anti-Imperial furor in Quebec. Laurier happened to follow Sir Douglas Hazen, a Conservative cabinet minister who was a close friend of owner Crockett. When Ford asked his Halifax desk how much copy they wanted on Laurier, the response came back: “Ignore Laurier entirely. Send Hazen verbatim.”

That was the way it was, mainly because the parties owned the major papers. Macdonald invested his own money in repeated newspaper ventures that supported Conservative policies, including the Mail and then the Empire in Toronto. So did Laurier who worked to assure the welfare of Liberal-leaning papers, especially including Le Soleil in Quebec and La Presse in Montreal. At one point Laurier intervened personally to prevent a scheme by Conservatives to take over La Presse. Laurier did attempt to change the channel on access by offering off-the-record sessions with reporters from Conservative as well as Liberal papers. Revealingly, a Globe Ottawa correspondent protested, urging Laurier to maintain the previous practice of partisan publicity. He did not – on the advice of the reporter’s boss, Laurier’s friend Willison of the Globe.

From the beginning, journalists were active players in the government of the day, forming an intricate interlocking directorship between press and politicians. One season they might work in the Press Gallery, another time they would be in cabinet or the back room. Quebec journalists would bounce between federal and provincial politics and the Gallery. White, a respected Parliamentary reporter, got Macdonald’s help in his takeover of the Spectator in Hamilton. Later White and his brother Richard bought The Gazette in Montreal and turned it into the leading Conservative voice in the new country – helping Macdonald to secure his hold on Quebec. From that base, Thomas White won election to Parliament and became known for his prodigious work as Macdonald’s confidante and, until his death from pneumonia in 1888, a possible successor.

Likewise, lawyer-turned journalist Ernest Pacaud encouraged Wilfrid Laurier to get into politics in1874. Laurier, in turn, designated his friend as editor of L’Électeur, the newspaper the prime minister established with his wealthy friends as a counterpoint to Le Canadien, then run by Conservative journalist/ideologue Joseph-Isarël Tarte. Tarte later became Laurier’s public works minister. In 1896 Tarte and fellow Liberal MP Henri Bourassa were the federal negotiators in the settlement of the Manitoba schools crisis.

In the beginning, reporters would travel to Ottawa for the sessions, returning home after three or four months. In the dusty old lumber town, liquor flowed with the political gossip at the legendary Russell House on the corner of Sparks and Elgin streets, a favourite lodging for the “sessionals” who could afford it that pre-dated the Chateau Laurier. Stained-glass versions of provincial coats-of-arms graced a dome over the opulent rotunda. Liveried servants discretely worked the dining room to the dulcet strains of the house orchestra. Paul Bilkey, the Toronto Telegram correspondent at the turn of the century, noted in his memoir: “It used to be said that the Dominion was governed more from the lobbies and rooms of the Russell House than from the ministerial offices or from the House of Commons.” Journalist Augustus Bridle assured female readers of The Canadian Magazine, “Here you are more likely to discover the man you want than almost anywhere else in Ottawa, except up at Parliament.” Indeed the Russell was the temporary abode of senior politicians and bureaucrats, including Laurier, who penned letters from his bed-sitting room to his beloved Mistress Emile Lavergne. Lesser mortals settled into cramped rooming houses with no running water….