In 1938, DePoe left the University of British Columbia and signed up with the Royal Canadian Corps of Signals. He left for Europe as a wireless officer. Excerpt:

…Service in Europe was a turning point. The action in Italy and Holland brought him face to face with death. In one incident a comrade managed to get off a deadly shot at a sniper who had drawn a bead on both men. DePoe was on leave in Nijmegen when the Germans surrendered northwest Germany, Holland, and Denmark to Field Marshal Bernard Montgomery. It was May 4, 1945 — Norman’s birthday. “Our part of the war was over,” he wrote in his memoir. Four days later, VE day marked total victory in Europe. DePoe rejoiced: “There was a magic feeling about that day. We were suddenly eternal: nobody would ever shoot at us again, and nobody could kill us now.”

Back from the war, DePoe studied arts and modern languages at the University of Toronto and served as the managing editor of the Varsity newspaper, in those years a daily. He was a top student, but the scholarships and veterans’ benefits were not enough for a growing family. On September 5, 1948, he joined the CBC as a news writer, while he continued to take classes at the university and write freelance articles for magazines. His big break came when the CBC assigned him to fill in for a colleague who was ill and cover the 1952 Republican convention in Chicago. A star was born. By 1958 he had become editor and on-air host of the newsmagazine Assignment; the next year he was named host of CBC’s weekly Newsmagazine show. The subsequent posting to Ottawa would redraw the road map for television reporting on the affairs of the nation… 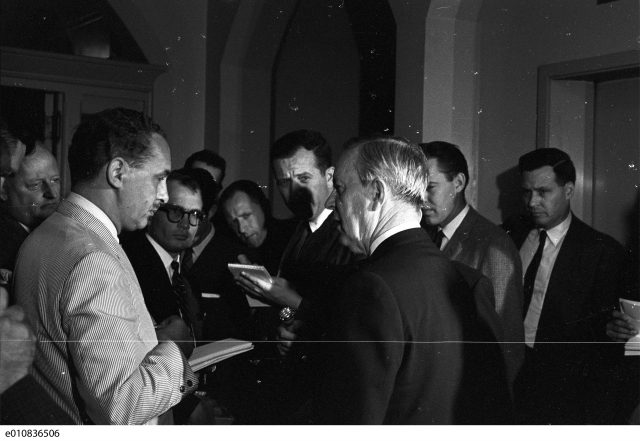 Power Prime Ministers and the Press: The Battle for Truth on Parliament Hill  [Dundurn, 2018]