The Politics of the Sport

It is, of course, a classic sports meeting. Two different systems of ice hockey are on trial: the methodical team approach of the Soviet state, with the emphasis on the ‘total athlete’; and the innovative style of the Canadians, orchestrated by the NHL and American capitalism.

Al Eagleson, the brash impresario of the Summit, has vowed that Canada will win all eight games. Accordingly, Canada must take them all. The Russians have nothing to lose, especially during the first four games in Canada.

Pravda says it’s nonsense to suggest that there’s anything Canadian about the NHL. The league, says Pravda, is American because it costs $6 million to buy in and “only American businessmen can afford that kind of money.” Canadians, of course, just look at the birth places and they know: Flin Flon and Timmins and Drummondville and Sydney. So beneath it all, it’s an ideological battle. Harry Sinden talks about it as a virtual contest in lifestyles. The Russians regard the match as only a detour from the one, true ‘amateur’ way. For Stan Mikita, who fled Czechoslovakia at eight years of age, it’s “almost like the whole free world versus them.”

Only through an intense round of international politics, top level diplomacy and back room dealing, was Canada able to direct an end run around the powerful Bunny Ahearne, head of the International Ice Hockey Federation (IIHF) and to arrange the Canada-USSR matches. Only through the most intense brand of domestic politics, often pitting Grit against Tory, were the details hammered out.

Ever since the mid 1950s when the Canadian hegemony in international hockey started to crack, Canadians have been frustrated by our inability to use the best from a country against European competition. As their techniques improved, the inferiority of our amateurs and junior pros became all the more evident and galling. And just how deep rooted the anger runs is revealed in a survey by Martin Goldfarb Associates commissioned by the federal government through Hockey Canada. The survey indicates overwhelming support for the decision to withdraw from international ‘shamature’ championships staged by Ahearne. [He and his IIHF will serve as the heavy in this narrative]. And one of the central themes of the survey was: if we can’t play our best, why bother?

In an interview [not used by TIME] Marshall McLuhan noted that sport and politics have wed — and Hockey Canada is exhibit A. The media prophet points to “the ping-pong-ding-ding-Peking” [table tennis matches], the Fischer-Spassky chess summit [which the American won] and now the U.S.S.R. hockey series as a pattern. McLuhan submits that the link between politics and sport is essential in the electronic age. People can’t take their politicians, or their politics, straight anymore. “Politics,” McLuhan theorizes, “must now be indirect, not direct, because that’s the only way to cool them.”

Adds McLuhan: “We are getting a cool form of international politics on the game front. The heat is syphoned off through audience participation. In politics, the audience doesn’t get a chance to participate: the ballot box does not really permit participation. That’s where sports have this tremendous power of catharsis. Sports also happen to be a very aggressive and destructive form of expression that is also very congenial to political life. But it’s cooled-off warfare. It’s warfare under wraps. It may be the only kind permissible from now on. The Olympics, of course, are all politics. We’re going to discover the Soviets and others, with their entirely professional set ups in sports, are going to be irresistible. And so are we’re going to imitate them.”

Doug Fisher, the former MP and an architect of the series who later chaired Hockey Canada, was speculating the other day along similar lines. “Guys like [NHL owner] Jack Kent Cooke will see the potential of all of this,“ he muses. “They’ll be into it very quickly in the United States. “ [Before his death in 2009, Fisher recorded his own extension account of his involvement in the negotiations that led to the series].

The Trudeau government is not unaware either of the benefits of association with Hockey Canada and the selects. As far back as June 3, 1968 Prime Minister Pierre Trudeau told an election campaign meeting in British Columbia’s Selkirk College that he intended to launch a wholesale review of sport in Canada. And when Harold Rae, the task force chair credited with coming up with the Series idea, champion skier Nancy Green and Montreal lawyer Paul Wintle Desuisseaux were named to the study, Trudeau reflected the thoughts of many Canadians when he said: “Hockey is considered our national sport. Yet in the world of hockey championships, we have not been able as amateurs to perform as well as we know we can.” John Munro, Trudeau’s minister of sport, effectively orchestrated the birth of Hockey Canada and recruited Fisher to the cause.

In more recent times, activity on behalf of Trudeau indicates he’s cribbing from McLuhan. Bargaining went on about the Prime Minister’s appearances at the Montreal and Toronto games. Clearly he wants a cool ride on Hockey Canada’s coattails. 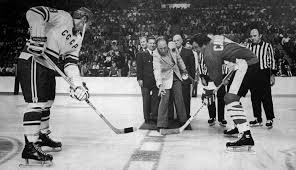 Prime ministerial operatives are seeking to escalate the Saturday night puck dropping ceremonies in the Montreal forum into a full-blown production. The PM, for example, [according to Art Harnett, president of media rights holder T.C. Productions] wants to do French and English interviews between the first and second periods. In Toronto, Gardens officials were sent scurrying this week with the news that the Prime Ministerial party would require 50 seats for next Monday’s game. The PMs staff also insisted on moving the official party from behind the Gardens’ penalty box to seats behind the players benches which, wonder of wonders, just happened to face the television cameras. Trudeau was also holding out for a starring role in the Toronto puck dropping ceremony which all those good Tories in Toronto felt was a part that should be played by Ontario Conservative premier Bill Davis.

Personal politics is a vital component to the series. Harold Ballard, for example, who awaits sentencing on fraud charges, has wrapped himself in a mantle of national pride. He gave team Canada free use of Maple leaf Gardens for the three week training camp and is spending his own money just to turn the TV lights on in his rink for practice sessions [the heat clears the fog that tends to hang over the ice in the current steamy weather]. Ballard has also seen to it that all announcements made during the Toronto game and during the three inter-squad matches are bilingual. “Ballard,” notes one hockey regular, “can’t afford bad publicity at a time like this. “