‘A great change that is good for hockey in general’

Ken Dryden dropped by my hotel room today, vainly attempted to call his old Winnipeg landlady, then talked for more than an hour about what the Canada-Russia series means to hockey everywhere.

Unlike many of the NHL pros, Dryden readily admits that there are lessons to be learned from this summit of hockey super powers. “People have an absolutely newfound respect for Soviet hockey. Before the series there was a feeling, ‘we invented the game and they are interlopers.’ What has happened now is a great change that is good for hockey in general. There is a realization that they play the game differently and that they are very good. “It may lead to a realization that we should adapt our game. There just isn’t any right or wrong way. In Canada, for example, the emphasis is on individual play. Teams that don’t have great individual stars now might be advised to play a team kind of game.”Then, there’s their conditioning. They are not, after all, a big team. But in a collision on the ice it’s 50-50 as to who’s going to end up off their feet.”

Dryden makes clear that he doesn’t consider adaptation a one-way street leading into Maple Leaf Gardens. The Soviets still have weaknesses which he thinks they could correct on the basis of this series. Their goaltenders, for example, don’t roam behind the net to stop the puck for the defencemen. “This is ironic, ” adds Dryden, “because they play such a possession kind of game. But often they give up the puck when it goes behind their net.”

The former [Ralph] Nader Raider also gives the Soviets low marks on shooting. “Because they play such a team game,” he notes, “often when they are 15 -20 feet out, coming in, they’ll pass instead of shooting – and that’s such a critical area from which to shoot.”

Dryden seems almost pleased that the early predictions about an eight- game Canadian rout haven’t panned out. “That way you wouldn’t learn anything new,” he suggests. “There’s a real sort of respect now. In the past, it was always them doing it against what we regarded to be inferior competition. But now they’re doing it against us.” The Montreal Canadiens goaler believes that the Soviet team is “definitely” capable of respectable play in the National Hockey league. “They do so many things well,” says Dryden. In fact, he wonders, will the contrast between this exciting series and a regular NHL season make the fans regard even a close fight for first place as, “dull stuff?” 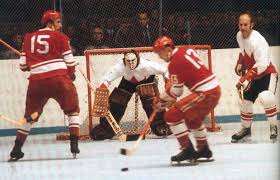 Dryden feels that this series will produce a much more critical form of hockey fan. “A lot of it,” he notes, “is that the fan is told, and believes, that he is seeing the very best hockey players in the world, that it’s the best show available. At least now, there’s a question. Perhaps the fan is going to become more involved, rather than accept blindly what he is told. Fans have allowed their eyes to be opened, and it’s just great.”

What has the series told Canadians about their hockey system? “Up to now,” Dryden responds, “there has been really little coaching. It was kind of house-league hockey, where you played each other and did what came naturally. In contrast, he notes, Soviet and other European coaches actually publish books which are read by a wide variety of coaches and players. Another problem is the Canadian emphasis on individual players who have NHL potential. “A kid really has to show something by age 17 or 18,” says Dryden, “or he’s through. He’s got to show he’s Junior A material by that time. He’s got to be big. He’s got to have a good shot. But US college hockey has at least demonstrated that, as late as 22 or 23, players have potential. Here, if you don’t end up in Junior A by 18, you end up in a mediocre league.” Change, as always, will be difficult. “You have an existing system,” says Dryden diplomatically, “that isn’t going to quit by itself. There are people in junior hockey making money. The NHL teams for their part are happy to get a kid at 20 rather than waiting until he’s 22 or 23.'” And a willingness to change might even overturn some of the conventional assumptions about pre-pro hockey in Canada, Dryden suggests. “Maybe you don’t have to play 60 or 70 games,” he opines.” Maybe you could play 35 – and also go to school. Now there isn’t a reasonable chance to do both. Maybe there’ll be more tolerance for other ways that can be effective.”

‘It’s not simply a question of how we play, or how the Russians play, but what new ways there are to play hockey everywhere.’

Dryden views Canada’s training and scholarship programs as a hopeful start. “Hockey Canada is working very slowly at this on the college level,” he says. “But a lot of people can’t qualify because of academic requirements. Maybe you need to push it back to the high school level. If a kid really wants to play hockey, he’ll do it. He might just as well do it in school.”

Dryden isn’t sure how the funds for such a program should be raised. “It would seem that the federal government would be one way – hockey school certainly can be improved. A lot of them are summer camps where the level of instruction is poor. I am not saying it should be hockey, hockey, hockey; it is a vacation for kids, after all. But maybe the level of instruction could be raised where it’s needed.” Overriding everything, in Dryden’s view, is the opportunity for fresh air to flow through hockey minds throughout the world as result of this series. “It’s not simply a question of how we play, or how the Russians play, but what new ways there are to play hockey everywhere.” Dryden concedes that “it is too early to tell” whether such profound change in hockey will emerge from this series. “Maybe,” he admits, “the initial shock will wear off and people will just forget.” Of one thing Dryden is sure: “This kind of series should be the logical end of any hockey season. There’s no reason why it shouldn’t happen — and every reason why it should.”