His mother was the driving force behind his hockey career

After the game tonight, I had a promised sit-down with Vladislav Tretiak, arranged with the help of Canadian diplomat Gary Smith, who is travelling with the team in Canada. I filed this report:

For many National Hockey League stars, Dad is the dominating figure in their careers. He built rinks in the backyard, drove them to early morning practises and stood in the snow banks while they bloodied their noses. For Soviet goaltender Vladislav Tretiak, the driving force behind his hockey ability was Moma.

When young Vladislav was growing up, his mother played bandy, sometimes known as “Russian hockey” because of its possible origin there. Later she pursued athletics as an instructor of physical culture and sport. One day during a visit to the central army club swimming pool in 1963 Vladislav spotted the colourful jerseys of the local hockey team. “I wanted to have a uniform like that”, the personable 20-year-old recalled during an interview with me after the 5-3 win over Canada in Vancouver Friday night. “First you must learn to skate,” Vladislav’s mother warned the young hopeful.

So it was that Tretiak tried out as a forward for Central Army’s second boys division when he was 11. The hitch, as Vladislav discovered, was that there were very few uniforms available. If he really wanted a sweater, Tretiak was told he would have to become a goaler. Tretiak jumped at the chance. He went between the pipes for this first game—and allowed seven goals in a losing debut. But Vladislav learned quickly: he was playing with boys two or three years older than he. Each year he moved up a division with the Central Army club. “Because I was so young,” he says, “everyone rooted for me.”

The record indicates that there was reason for the accolades: Tretiak is an “honoured Sport Master”, a two-time world champion, an Olympic gold medalist, and two-time winner of the nation’s best goaltender award. For Canadians, Tretiak will be remembered as the man who stoned the NHL’s best sharp-shooters for four games and sparked his team to an upset in the first round of the Canada-Russia series. 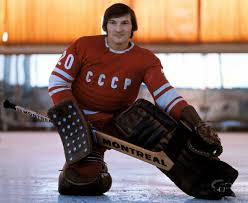 Tretiak is currently in the third of a five-year course at the Institute of Sports. He is a lieutenant in the Army and was married just before the trip to Canada to Tatania, an attractive blonde who is a fourth year student of Soviet literature. [She became a literature teacher]. He also has a 22-year-old brother, a physicist who has no hockey interests.

Vladislav clearly enjoys the life of a hockey star in Moscow. His eyes light up when he boasts: “I get many letters from girls, even now that I’m married. They send me flowers and used to call me up all the time.” The Tretiak still live in Vladislav’s old bachelor pad, a one bedroom flat near the Leningrad highway, just 15 minutes from the Central Army stadium. Until recently Tretiak owned two cars, an Italian Zaguly and a Moskvitch. He sold the Moskvitch recently, but relishes the fact that, as he puts it, “I stand out in the crowd as a hockey star.”

The state supplies the Tretiaks with their flat and of course all tuition is free. This leaves certain conveniences to buy with his army pay, the amount of which he declined to reveal. As soon as his wife is pregnant, vows Tretiak, they will move to a larger flat. When will that be? “Who knows,” he smiles. “The sooner the better.” When he was a bachelor in apartment-shy Moscow, Tretiak was, literally, the life of his own parties. Often he would invite his friends over to listen to music and dance. On his nimble feet today, Vladislav wears black patent leather loafers.

One of Tretiak’s major inspirations was former national team coach Anatoly Tarasov, his mentor now with the Central Army team. Tretiak relates that he was also profited from studying the styles of such NHLers as Jacques Plante and Tony Esposito. I asked Tretiak if he is having a hot streak in Canada and whether he has ever played so well. “I always start off the season well,” he replied. “But since I am the only goaler, I’m pretty tired late in the season. Tarasov always plays me because he wants to win all the time.” On the flight over to Canada, Tretiak was concerned about being bombed by the NHL players. After seeing for himself, he says modestly, “We were lucky to win.”

Before the series began, somebody forgot to tell Tretiak that Canadian scouts had reported that the Russians were weak in goal. A panel of hockey experts in Canada awarded him a ring as the most outstanding player of the game in Montreal and Winnipeg.

What, Soviet coach Vsevolod Bobrov was asked after the second ring, will Tretiak do with the gold? “Well, he was just married and the second ring will probably be for his bride.” What about a third or fourth ring? Who would get that? “I think he also has one girl friend.”

[I did not travel with the team to Sweden, a perk reserved for the two dozen “regulars” on the NHL beat. The two games in Stockholm were brutal. The two West German referees handed out more than 20 penalties during the two games, including two 10-minute misconducts, several for fighting, some for spearing and high-sticking. A Canadian cross-check broke one Swedish player’s nose. Wayne Cashman left an encounter in the second game for hospital with a severely lacerated tongue requiring 40 stitches. There was even an ugly stick-swinging duel that had both players slashing wildly at each other. The Canadians did come away with a 4-1 victory in the first game. And then, as a kind of harbinger of things to come, a 4-4 tie with Esposito scoring the winner with less than a minute left in the game. Team Canada also took advantage of the games and practices to get familiar with the larger European ice surface. The controversy over the uncertain refereeing by the two Germans — Rudy Bata and Joseph Kompalla— also stoked animosities that would erupt into major showdowns in Moscow. And, in a strange way, the booing of the Swedish fans and the harsh denunciation of the Canadians in the press served as a bonding agent as the players headed for Moscow. Meanwhile, tellingly, some of the Soviets were so confident of victory that they took off for a week at a resort on the Black Sea in Sochi. They only started practicing again three days befor Game 5. Already, the Canadian invasion of Moscow was underway.]