Hockey fans from 10 provinces are ready to party

September 21
The Canucks Have Landed (filing from Moscow)

Although I was a working journalist for part of the international hockey summit, I was not part of the official NHL entourage of regulars and had to travel as a tourist to Moscow—as a designated “Beaver”, the code name of the Aeroflot charter flight group to which I had been assigned. Herewith some early impressions filed on Thursday, the day before Game 5:

The Canadians are landing: 2650 of them, here in 11 planes from from 10 provinces, each with his own story to tell. There are bank presidents, board chairmen and cattle ranchers. There are doers from the Timmins Chamber of Commerce, secretaries from Parliament Hill and lawyers from Vancouver. One matron is making her first flight and an Indian named Carl Marvin Lewis from Toronto (no kin) is parading around in eagle feathers.

We are marshalled to breakfast in the morning in 30 groups at seven hotel, and each unit has a code name: Beaver 1, Fox 2, Buffalo, Deer or Elk, a system pioneered at Expo ’67. Some of the more boastful males claim to be Wolves, but they obviously don’t know a thing about Moscow nightlife: it is non-existent.

Moscow-bound Canucks this week were at least forewarned, if temperamentally unsuited, for a smorgasbord of snafus served up for them on the eve of tomorrow night’s game. Kentours of Toronto, for example, included with the tickets a brochure of Moscow dos and dont’s which helpfully outlined such scenarios for disaster as lost luggage (two incidents reported so far, one found), ticket cancellations and agonizing waits (up to an hour just to check in).

But the average Muscovite’s lot is worse: a crop failure this season has meant, among other things, rationing of potatoes. Riding down Kutuzovsky Prospect Wednesday I saw vegetable markets ringed with patient citizens. A special session of the Supreme Soviet, 2,000-strong, called to discuss the shortcomings of the first year of the five-year plan for more consumer goods, has also meant that the Archie Bunkers of Moscow have been virtually cut out of tickets for the four games to be played at the 12,359-seat Dvorets Sporta.

Because of prior warnings, it was with a good deal of resigination that we Beavers learned Monday [Septemeber 18] in Montreal that our Aeroflot flight to Moscow would be delayed for several hours. The official explanation was that weather had closed the Paris airport, our refuelling stop. But once our new Ilyushin 62 quad-jet was airborne, the fine Soviet service and efficiency of the crew obscured the fact that we didn’t make a refuelling stop at all. [Indeed the non-stop service from Montreal had been in operation for several years]. As always, in this vast and complex society, there were no real answers for the hitch. There never are, it seems. Here especially, patience must be substituted for knowledge. More often than not it is a virtue rewarded amply by the genuine friendliness of the people — and other pleasant surprises. 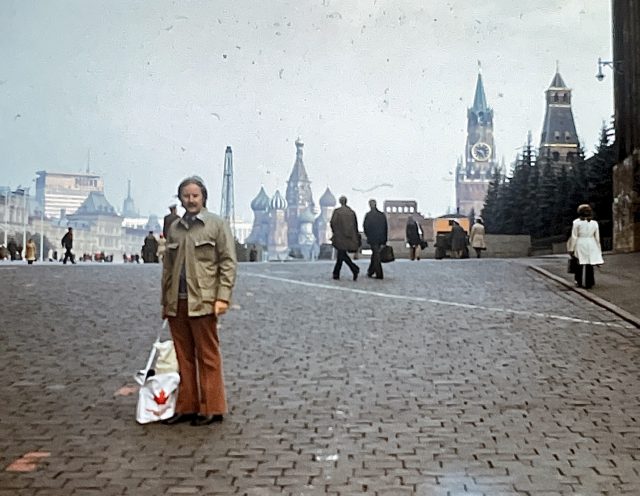 Food at the vast Hotel Rossia, where I am lodged, and at the nearby Hotel Intourist, where Team Canada its billeted, is good, if predictable. Baths can be taken by visitors who remembered to bring sink stoppers. And out on the streets, where the first impression is one of chary reserve, the locals seem too warm to the greeting, “zdrazhv-stvui-t’yeh (hello) and Kahnahdah.

When Moscow bureau chief John Shaw took me over to the Sports Palace Wednesday, Kahnahda, in fact, seemed like a code word. Although unscheduled, our visit resulted in helpful directions to an open side door by a cleaning woman. Inside the theatre-like structure, workmen nailed panels to walls amid the buzz of electrical saws. In what amounts to major concession to status-seekers, the Soviets have installed two new boxes on one side of the rink to accommodate some media people and dignitaries. A new roof has been installed to improve acoustics. At either and of the rink there is new rope-netting — nothing as the workers conceded, to rival the plexiglass protection which surrounds North American rinks; but enough, presumably, to spare the end-zone fans from dealing with wide-of-the-mark slap shots by Canadians like Dennis Hull [but not a Canadian goalie surprised by a puck springing back into play, as it turned out].

At rink level Anton Potapoff, chief of preparations, paused during the ice-making to explain that his crew was given just 15 days to prep the stadium. It was only five days ago that workers laid the first sheet of ice. But already Anton could proudly boast two-and-a-half inches of ice, underlaid with three cubic metres of skim milk to cut down the glare. (In contrast, artificial ice in Canada is normally only three-quarters of an inch thick). In the two days remaining before Game 5, Potapoff’s crew planned to shave and re-surface the rink to make it glass-smooth.

Hockey is not the only thing for which Anton’s crew prepares. The stadium, part of the massive Lenin sports complex for events like soccer (100,000 seats and 30 tennis courts) is home to some 20 different spectacles, including wrestling, boxing, judo, volley ball, table tennis, ice reviews and jazz concerts. Outside the rink, in an area abutting the Moscow River and within sight of the dachas of the Lenin Hills, school children formed in groups for exercising late Wednesday afternoon. Nearby on a huge square, perhaps 500 youths drilled for a festival.

Interest in the hockey matches is reportedly high. But it doesn’t yet rival the whispered chatter about the harvest failure or the big, end-of-season soccer matches. The mood will certainly change when perhaps 50-million viewers tune in the hockey game live (and, for a select few, in colour) Friday night. The first cold winds of winter blowing across Red Square Wednesday also are a reminder that, by late November, the open-air rinks should be resounding to the sounds of the future Valery Kharlamovs.

There is at least enough interest in the Canada-Soviet games to produce grumbling from fans who vied for no more than 1,500 first game tickets (top price: $7.50, or more than three times the usual). [Still that was only $52 in 2022 dollars]. High party officials, influential fans from east Europe, some of Moscow’s million bureaucrats, trade union brass and army officials grabbed most of the available tickets. “Thousands didn’t get tickets,” complained one Muscovite lined up a week before the first game at the Sports Palace.

The Soviet delegation at the games is expected to be headed by a key political figure. Brezhnev also visited the Canadian exhibit at an agricultural fair this week, as part of a tour of other national exhibits. Pravda took note of the visit and on Wednesday Sovetskaya Sport served up thumbnail sketches of the Canadian stars.

The mass circulation sports paper noted pointedly that 12 Canadian players are more than 30 years of age, 13 are more than 25 and that the youngest five are 21 [An authoritative statistical analysis by accountant Richard Bendell for a 2013 book established that the Canadians were decidedly older on average with only 12 players under 27, compared to 23 for the Soviets]. “Judging by their height,” Sovetski Sport added, as if to belabor the point, “Team Canada players could play basketball.” [Indeed, Bendell documented that sixteen Canadians were 6-ft or more, compared to eight Soviets].

The bios were essentially non-controversial. The paper picked Stan Mikita, Phil Esposito and Jean Ratelle and their respective line mates as the best Canadian players. Sovetskaya Sport also described Yvan Cournoyer as “netlike”, referred to Frank Mahavoilich as having been “sold” to Detroit at one point in his career and noted of Wayne Cashman that the has the reputation as one of the toughest players in the NHL. Ever faithful to the public image, the daily added: “Even hockey books note that his left hook is the best in the NHL.”

Canadians in Moscow this week could validly make the counterclaim that the Soviets have a fast right hand on Canadian currency. Increasingly, it seems, the hosts are devising new ways to gobble hard cash. Although some 60 reporters were accredited to Team Canada, only 28 were allowed to travel with the team. The Soviets insisted that the rest of us pay the full charter rate from Canada [about $600 as I recall, or about $4,000 today, for flight, room and meals]. The rationale seems to be that because the Soviets profit only from an Air Canada-Aeroflot deal on group charters for Canadians, they wanted to limit the number of Canadian press freeloaders.

The dollar stores — state run Beriozkas — are, of course, wide open to visiting Canadians. In the Hotel Russia, the most lavishly stockled, they can buy caviar, watches, gold earrings, carved dolls, cameras, vodka and other liquor, books, records and a host of other souvenirs. American cigarettes, as well as local brands, are also available at dollar bars. In Beriozka ‘supermarkets’ further from the hotel, tourists can also plunk down cash for steak, beer, mineral water, detergent, apples and milk, most imported.

There are even obvious attempts by a few locals to swap rubles. Last night in a classically humours scene, I was approached in a hotel lobby by a seemingly tipsy local for a light. After trading national lapel pins, he drew closer and asked: “Scuse me, you want to change dollars?” After I replied, “Nyet,” we parted. Three paces away stood a rather forbidding character in a brown leather coat — all of this, mind you, taking place in a hotel where most of the 2,000 members of the Supreme Soviet are currently quartered.

The “Parliament” meeting, in fact, has been the cause of not little Canadian grief. Because the Soviets reclaimed 1,000 rooms at the Hotel Rossia for the meeting, Intourist had to switch many Canadian visitors to something less than first-class hotels throughout the city (originally only three hotels would have been required for the Canadians). At some hotels tourist complain about indifferent food, closet-like rooms and the fact that hotel bars serve noting but neat vodka. “There are places in the world,” said one unadventurous Torontonian on his first visit here, “I’d rather visit.”

In the main, however, this is an exciting environment which can be mastered enjoyably with patience — and some thumbing of the trusty Berlitz phrase book. When I arrived as a “Beaver 2” I discovered that I would be the only reporter staying in the east wing of the 6,000-bed Rossia, Europe’s largest. This gargantuan, overlooking Red Square and the Moscow River, is effectively four separate hotels, connected by hallways policed by stern women at desks who control the room keys. I determined to move from the Vostok wing to the north Sever wing where other reporters were living. After only two hours the switch got made. But I had to trade my “Beaver” tag for the “Fox 2” designation — perhaps an appropriate one for members of the Fourth Estate.